Close
Back to top
2013Past Events

Whether imagined, lived or witnessed, most if not all of us know something of what it is to fail. Our machines and tools wear out, becoming trash and artifacts, and infrastructures break down. Living bodies die and become inanimate bone, fossils or food. And our best efforts fall short of the expectations set for them, both by others and ourselves. Yet failure is rarely as straightforward as we might like to think. It seems there is always another way things might have gone – a sustained faith that alternate paths might have revealed themselves if only there had been more time, more resources or greater understanding. On these occasions, we may even wonder how the criteria for failure and success are made, embodied, and critiqued. When a failure appears self-evident, we are still confronted by the question, according to whom? What happens after failure? What are the costs? In sum, what do we do with failure?

The overarching question we want to ask is: what is the work of failure? We hope to explore this question on a number of registers, including but not limited to: (1) failure as desirable, (2) failure as inevitable (3) the engineering of failure and (4) the generative potential of failures. In addressing failure in each of these unique but related ways our aim is two-fold. First, to open failure to an interrogation that spans a wide range of political, philosophical, temporal, aesthetic and cultural landscapes. This could involve sites as diverse as design practice, queer theory, and international affairs. Our second aim is to challenge participants to engage failure as both event and process, opening up new possibilities for what it is and could be to fail.

We are thrilled to announce that Dr. Joseph Masco will be joining us on April 12, 2013 for this year’s “Failures: an anthro-studio” conference at The New School for Social Research. His keynote presentation will commence this day of discussion and creativity.

Dr. Masco teaches anthropology at the University of Chicago, with interests in science studies, political ecology, and mass media. His distinctive work on American security culture includes The Nuclear Borderlands: The Manhattan Project in Post-Cold War New Mexico (2006) and a contribution in Imperial Debris: On Ruins and Ruination (2013). 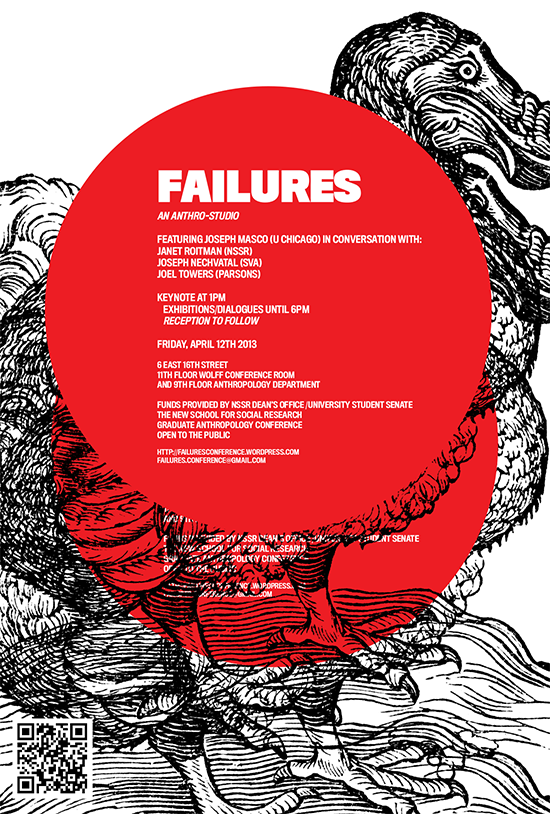