practices of refusal,
insubordination, and disruption

What might it look like to read the present through the lens of failure(s) to comply? Can failure be an agentive act? We invite scholars, students, artists, activists, and community members to engage with these questions.

“Compliance” means following the rules — but who demands compliance? Bureaucracies, governments, structures of power. A “failure” to comply is often determined from above, with requirements, rules and regulations, both legal and social. We propose, here,  that the act of failing to comply can be active, lived, and practiced both individually and/or collectively. Although the expression usually arises from the legal framework, we suggest that failure(s) to comply are also encoded in the mundane of our everyday. If, as Sarah Haley says, “sabotage is not about success or triumph against systematic violence” but “about the practice of life, living, disruption, rupture, and imagined futures” (2016: 201), then what can we make of our “failure(s) to comply?” Who fail(s) to comply? How, and why? With what or whom? As we consider these questions, we seek to engage the many practices of resistance, refusal, insubordination, disruption, and their consequences. Yet, while we direct our attention to human failure(s) to comply, we also wish to open the debate to other kinds of failures. What might we learn from systemic failures to comply? And when does individual failure become a symptom of systemic failure? Furthermore, what might we learn from more-than-human failure(s) to comply: from weeds sprouting through cracks in the pavement to animals crossing borders?

We want to explore alternatives to the subtext of domination, extraction, and exploitation that underlie our world: how can refusal and rejection offer frameworks for new kinds of relationships, practices, care, and alternative social worlds? 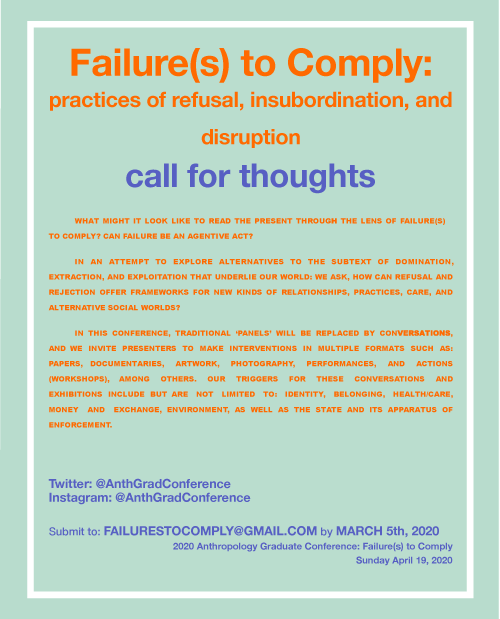